Practical things academics can do to help colleagues affected by the U.S. travel and immigration ban.

Last week, President Donald Trump issued a 90-day prohibition on entry to the U.S. by nationals from seven predominantly Muslim countries – Iran, Iraq, Libya, Somalia, Sudan, Syria and Yemen. The same executive order blocks all refugee admissions for 120 days, with the exception of Syrian refugee admissions, which are suspended indefinitely.

Lawyers got to work, with mixed results. Some people from the seven countries have indeed been prevented from entering the U.S.; others have not. Suffice it to say that, for now, travel to the U.S. for nationals of those countries is very uncertain. And indeed, Muslims from countries other than the affected seven, as well as members of other marginalized groups, may well be wary about entering the U.S.

By now, you will likely have received communications from your professional organizations about how they’re responding to the ban. The Canadian Association of University Teachers, the Ontario Council of Faculty Associations, and University of Waterloo President Feridun Hamdullahpur have all issued statements too.

Beyond such statements though, what practical measures can you take in response to the travel ban? Herewith, in no particular order, is an initial round-up of practical things you can do. If you have other ideas, please add a comment below this post. We’ll update the list as we receive your ideas.

Things to keep in mind

FAUW hopes that this advice is helpful beyond the University of Waterloo. Please feel free to adapt, share, and use this post. 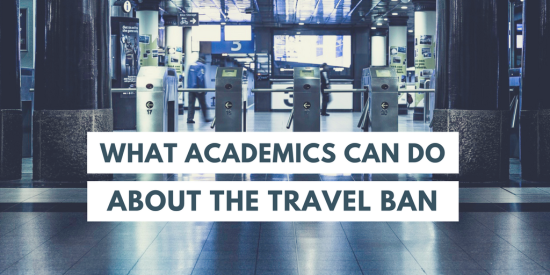 One thought on “What You Can Do About the Travel Ban”

This site uses Akismet to reduce spam. Learn how your comment data is processed.

Welcome to the FAUW blog

This blog is published by the Faculty Association of the University of Waterloo to inform faculty members about current issues and foster open debate.

Unless otherwise stated, the opinions expressed are of the authors, and do not represent the views of the Association.